In the interest of full disclosure, I’m attempting to come at this with an open mind. However I’m unable accept the initiation of the use of force against another human being to be the solution to anything.

Before we get too far, here’s the PDF of the document I received.

With this in mind, let’s examine the author before we get to the document.

Examination of the Author

Since this document specifically calls attention to biases in other authors let’s examine the author of this document.

I’m well aware that calling attention to one’s character is in-fact a logical fallacy. This is obviously something that someone should bring to Mr. Fuller’s attention.

The author has actually written about this topic before, here.

The very title of is not striking of a very objective tone. He’s coming out in support of not just corporal punishment, but “spanking” in the very title of his document.

On this note I was also able to find a commenter on a blog who I think accurately points out that there may be miss-citing of sources on his documents. The article and subsequent comment can be found here and a PDF backup here.

Should this hold true, it’s a serious blow to any credibility to any arguments using these sources.

Examination of the first paragraph

The Mr. Fuller starts out in the very first paragraph with an anecdotal story of a young lady who is plotting to kill her mother! Anyone who looks at this objectively understand that Mr. Fuller has absolutely no interest in actually pursuing any truth here. He’s telling you this story to trigger an emotional reaction.

This is not the mark of someone who is pursuing knowledge, reason and evidence.

Further Analysis of the introduction

Mr. Fuller then goes forward explaining how by some measures assaults and homicide has gone up in youthful populations with cited sources.

Mr. Fuller also brings in quotes from several sources. Which also sounds striking, including quotes such as:

About 20% of kids now “have some sort of developmental, learning, or behavioral disorder

It’s a striking quote. It means absolutely nothing. It doesn’t prove anything– other than maybe that some places in the world 20% of their kids have “developmental disorders” Also think for a moment how easily things like “ADD” are diagnosed and how they might also be considered a “Developmental Disorder”

Moving on we see this sentence:

Substantially fewer parents stay home with their kids. 15 And divorce rates are the highest in recorded history.

At the same time, it has become politically incorrect to criticize the “tremendous decrease” of spanking during the past fifty years.

Growing academic, political, and media pressure has persuaded twenty countries to ban physical discipline—that is, to take children from their families because of spanking. 18 Even where corporal punishment is not outlawed (like in the U.S.), those same pressures have made spanking the target of things like child welfare investigations, parenting education, and custody disputes.

Getting to Mr. Fuller’s argument

But maybe lawmakers and child welfare workers should pay more attention to the research suggesting that physical discipline can be helpful in certain contexts.

If we are going to put this into more direct terms I have gathered he’s arguing:

There shouldn’t be any laws on physical discipline of children because the research I am going to put forward proves that physical violence ( spanking ) is effective.

Examination of the Argument

The first statement in support of his argument:

But a child’s mind is also primitive.

It is during the tangible, concrete stages when physical discipline seems to be the most helpful.

The source cited here is listed as infra, specifically:

I’m unsure if this is what he’s referencing? Perhaps there’s a part IV? Either way it’s behind a pay-wall I’m not too keen to bother with.

If you have the source or know what he’s referencing and it’s relevant I would have interest in it.

Moving on we have:

the Family Socialization Project at the University of California, Berkeley indicates that many of the best childrearers use spanking when the child is young and concrete thinking.

With a source See id. Which seems to be similarly obfuscated

A quick Google Search however lead me to this

Which on the conclusion page reads:

The results of this study should be viewed cautiously given the following limitations: (a) the design was cross-sectional and correlational (and thus has third variable and directionality problems in interpreting results); (b) the sample sizes were small thus limiting generalizability of findings; © no data was obtained on the custodial parent-child relationship and how it changed from pre- to postremarriage.

Not sure if this was what he was referencing exactly but it’s clear that there could be problems with using it as a source. Mr. Fuller also neglects to use any specific data from the source to re-enforce his argument.

The cracks are showing

Perhaps I was being a little too hard on Mr. Fuller, people tend to stir up some emotional subjects and anecdotes when they’re passionate about topics.

Say we give him a pass?

In this light, perhaps it makes sense why youth dysfunction is increasing at the same time that corporal punishment is decreasing.

He’s drawing a correlation and implying causation. A high school statistics student understands the problem with this.

To function in society, people must learn to control themselves enough to not break the law or harm other people.

I’m really confused, if you’re spanking a child you’re inflicting enough pain to change behavior which causes immediate–perhaps not lasting harm. So why is displaying this kind of behavior towards your child a good idea?

Just a moment ago Jason Fuller was advocating for concrete teachings due to the limited reasoning capacity of a child.

How can we expect the child to have the capacity to reason that it’s not okay to hit others when their specifically being hit!? Isn’t it easier to reason about:

I’m hitting you so you don’t hit anyone else!

What has been put forward here is hypocritical anti-rational nonsense.

Attacks on Murray A Straus

I’m unable to independently verify the statement by Mr. Fuller:

He admits that his goal is to prove that physical discipline, “by itself, has harmful psychological side effects for children and hurts society as a whole.”

The sources he cites are inaccurate at best. I challenge anyone to find this and bring it to me. I will gladly publish an amendment to this page leaving my current statements intact for the world to see.

Also notice how he attacks Straus’s character and not his work. This is specifically a tactic of sophistry for you to avoid looking at the man’s work and instead throw out the idea of ever looking at it because a “Bad man” or a “Biased man” wrote it.

Challenge the work, methodology and the data, not the man.

Look at the average IQ in Singapore, some sources put this at 108

Look at the average IQ in South Korea, some sources put this at 106

Now look at the crime rate.

Mexico, some sources put this at 88

Sudan, some sources put this at 71

Look at the crime rate for those places.

Could it just be a coincidence? Yes. Just like murder rate and ice cream sales, as well as Mr. Fuller’s conclusion they go together but they don’t necessarily mean anything.

For all of the flack Mr. Fuller likes to give the poorly designed “anti-spanking” studies he should have chosen a better study to support his claims: 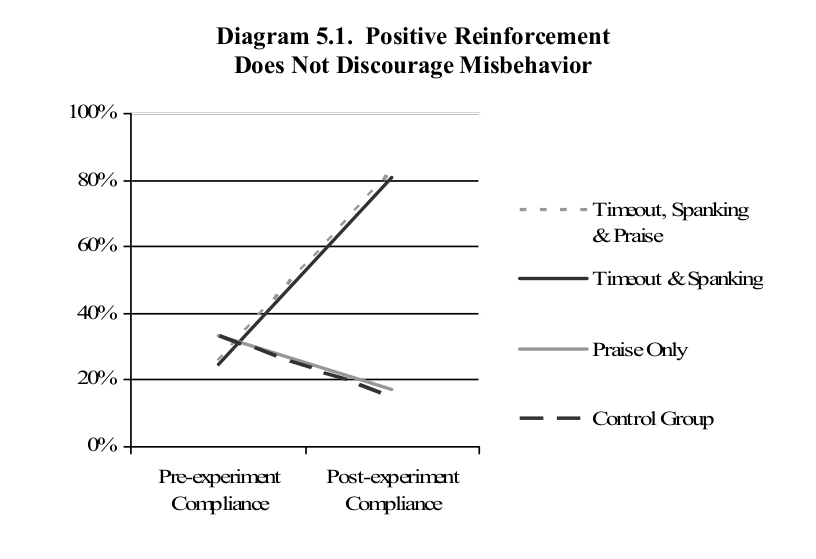 Note that if you’re truly trying to test whether or not non-violent parenting is just as viable as spanking you wouldn’t combine the Timeout and Spanking categories unless you specifically had an agenda. In-fact you might wish to separate them.

Sure you might claim the study was limited and this was the data he had–that sure doesn’t make it any better.

He practically started with it. Although I do think it’s worth analysing his concluding paragraph anyway.

An absolute rule that “physical punishment is always inappropriate” would represent a widespread insensitivity to the concrete, tangible needs of at least some children.

Again we have a poorly cited source which is not only difficult to follow but also to find.

What children? What sample size? What insensitivity? Tangible needs? Why does a child ever need to be physically punished?

Last but not least:

All children have a right to learn in a way they can understand. But if we ban spanking, we risk robbing some of them of the fundamental human right to learn and mature normally.

Children cannot choose their parents. They often have absolutely no choice in the method of discipline they receive either.

It is also a complete violation of the principle of self-ownership for another human being to have the “right” to violate one’s own right to be free of unwanted physical violence.

Sure you try to argue children are somehow different, less capable and thus, “require” physical punishment – all predicated on a limited ability to reason.

Here’s one for you, tell a three year old you have a picture of a candy bar inside of a box and see if they’re happy with your “gift.”

Then tell this same child, who “thinks in the concrete” that you have a box with a real candy bar in it.

Ask the child which box they’d rather have. By the logic put forward they probably wouldn’t want either box because they both require abstract thought! Maybe you’ll find out the kid is smarter than you think.

If Mr. Fuller ever reads this article I would suggest that he take a course on philosophy, statistics, and maybe an English class so he can cite some sources clearly and effectively.

I can’t really say that I can blame him for his work, he’s obviously involved with a law school where he was likely taught how to push opinions and conclusions with language–an essential skill for a lawyer I might add.

Sadly this is detrimental to any real research or science and as such should be called out for what it is and avoided at all costs. It is sadly too easy to spread misinformation.

Feel free to reach out to me if you have any questions or corrections for me.